Wedding videos have been through somewhat of a revolution in the last 10 years. There are many factors that have helped shape the industry and improve the work that is being produced which I will touch upon later. But when I thought about how best to highlight the changing nature of wedding films, I considered one simple question that most of us have been asked by either our friends or a family member at some point in our lives…… “Would you like to see our wedding video?”.

This one seemingly harmless question would have once upon a time been enough to fill any innocent friend or relative with dread. What was to come? Did I really have to sit through the entire ceremony of our cousin Shirley’s wedding again, and all filmed in an all too standard definition from one angle at the back of the church?! Early wedding videos were far from cinematic. The fact of the matter was that the camcorders available in the early days of video did not offer a sensible option for which to film weddings in an innovative way. They were large, cumbersome, and produced bad quality pictures and sound.

As a result, the first wedding videographers gained a reputation for producing an unprofessional and uncreative product. This may have been unfair as the tools at their disposal were not up to scratch, but as they say, mud sticks. It has taken a long time for this perception to change. Throughout the 1980s and 90s the industry became more professional. It would be a stretch to call it a creative industry but digital cameras and more advanced editing systems meant the industry was taking strides in the right direction. 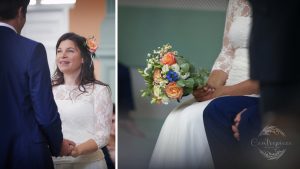 As we stepped into the 21st Century huge advancements were being made in digital photography with cameras becoming available at a cost even the amateur market could now afford. Camera manufacturers saw an opportunity. In 2008, the Canon 5D Mkii was released offering video recording capabilities. The camera was met with some scepticism. It appeared to be created for photographers, with the added option to record Full HD video direct to memory storage cards. The like of which had not been seen before, and people were dubious as to whether people would really want to record video using a camera that seemingly did not have the same usability of traditional camcorders. However, Canon had tested the water for a camera system that would have a huge bearing on changing the shape of the wedding video industry, and the entire video production as a whole. The camera has a soft spot in my heart, being the first camera that I would use as a video industry professional, and has led to many other camera manufacturers looking to produce smaller camera bodies with a number of different added features. The Canon 5D Mkii produced excellent images in Full HD video, the likes of which had never been available at such an affordable price, and the smaller size of the camera compared to the bulky more traditional style cameras, meant videographers could comprehensively change the way they filmed a wedding.

Traditional style camcorders were designed to sit on the shoulder. A way of filming that, other than mounting the camera on a tripod, was almost the only option before built in camera and lens image stabilisation systems were so advanced. This way of camera operating is still common place today, and is a technique that I often use when shooting video. However only operating a camera in this way is restrictive. Everything is shot from the same height and movement around groups of people is harder due to the operators restricted vision. Not to mention the fact that it is very difficult to hide with a big camera attached to your shoulder; a skill that is vital for the best wedding videographers. Smaller more portable camera systems have offered the versatility to film in a hugely creative manner, and with added innovations in camera gimbals/stabilisation systems, and drones, and the result is an ever increasing advancement in what can be produced for a bride and groom on their wedding day.

Good quality sound is also crucial to the work of the best wedding videographers, and even though they are perhaps not as glamorous as shiny cameras and lenses, I for one am extremely grateful for the recording devices that it is not possible to easily hide within the pocket of a groom or best mans jacket pocket, and record excellent quality audio.

All this technology is great, but it takes highly skilled individuals to utilise these tools to tell a story. What we are seeing amongst the best wedding videographers is a release from the shackles of what has gone before. A freedom to create unique works of art using these modern cameras and microphones. The internet has been the heartbeat of this revolution as creators can put forward their work into the world and share it with their peers and prospective brides and grooms. This has had the knock on effect of being highly beneficial to those couple’s getting married, as all work becomes scrutinised through social media channels and online reviews. In my opinion this has had a positive impact as wedding videographers continuously strive to produce quality pieces of work to ensure their reputation stays strong, which due to the world wide web can now be global.

So back to that question….. “Would you like to see our wedding video?”

I believe we have completely shifted from a time when that question could be put into the same category as being asked to sit through grandads boring projector slide show of holiday snaps, to a time where people are now producing wedding videos that audiences will voluntarily watch of couples they have never even met. “Wedding cinematography” is a contemporary term to draw a distinction from the less creative wedding videos of the past, but whatever we choose to call them, modern wedding films are often original and inventive productions. These films are greeted with excitement, enthusiasm, and a desire to share with friends and family on social media platforms for anyone in the world to watch. I am of course referring to the wedding videos produced by top professional wedding videographers. The ones created with skill and artistry, and have at their heart a flair for good storytelling. Because that is the truly appealing and timeless element of these beautifully crafted films.

They are after all, modern day love stories.